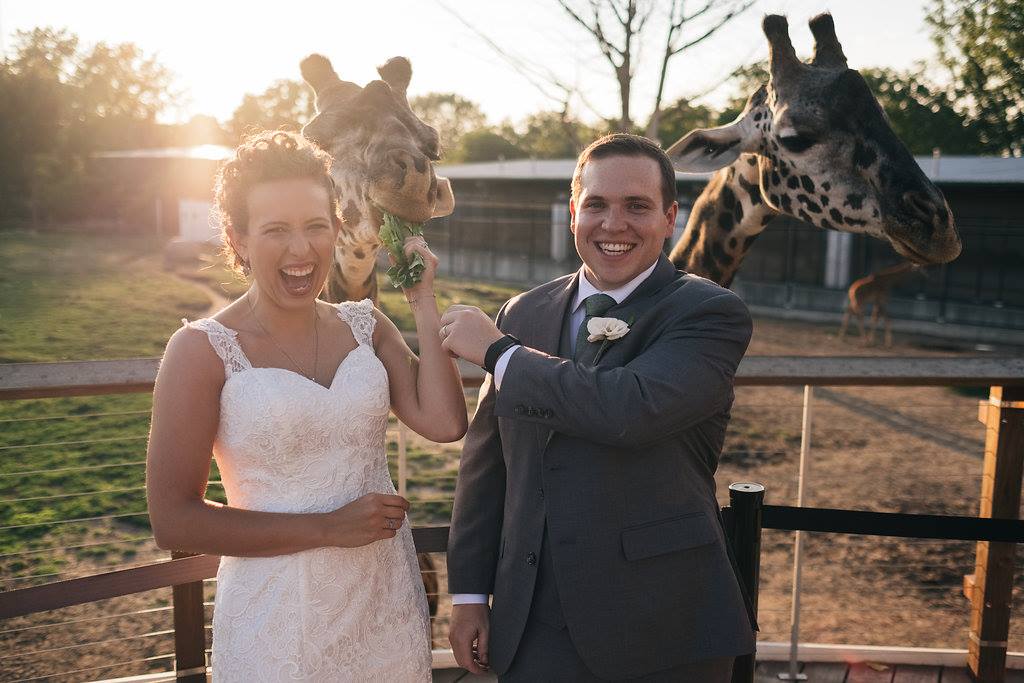 Wedding at the Zoo

How we met:
"Kelly & I met at Michigan State University at a house party. We had mutual friends living there and met in the attic.
We later found out we had a class together, so we would study during the weekdays and hang out with our mutual friends during the weekend.
Eventually, we became best friends,
& not too long after that, we started dating. We were together for five years before he proposed."

Proposal:
"My husband & I were visiting friends out in Arizona in March of 2016 & went hiking on a trail called Devil's Bridge in Sedona.
At the end of the trail, you reach the bridge, which is a free-standing, natural red rock bridge. We went to take our picture on it,
& it's there where he got down on one knee & proposed to me.
Not only did our friends capture it on video, but they were there to witness one of the happiest days of my life.
It's a moment I'll always cherish."

Why we chose the zoo:
"We chose to get married at the Toledo Zoo because it met both of our "must haves."
I wanted to get married somewhere unique, & he wanted to get married in one of our hometowns (he is from Toledo.)
Plus, since we were planning our wedding out of state, we needed to work with someone who could provide almost an all-in-one package, & the zoo was able to do that.
They had a bakery on site, as well as a gourmet menu for our plated dinner. They even coordinated with our other vendors to make sure they all knew the schedule.
It was a spectacular service all around."

Wedding Day Highlights:
"My favorite memories from that day started about an hour before the ceremony, when we exchanged our gifts.
He tends to overthink gifts, so he ended up buying me four LARGE gifts, which was incredibly sweet, but so typical of him. I felt like it was Christmas!
Another moment I can't forget is when I saw Kelly as I walked down the aisle.
My eyes glued to him; there were 200 family members and friends surrounding me
& all I saw was him.
Finally, the biggest highlight from our wedding was the giraffe feeding station we had during cocktail hour.
People could come feed lettuce to three giraffes on a deck, & we took some great photos with them."